Microgreens are a popular choice for those who want to grow their own plants at home. They are also an excellent choice if you don’t have much space because they take up little room, while providing an abundance of nutritious microgreens food for your family.

Microgreens don’t take long to grow and because they’re so small it seems like you should be able to regrow them after you harvest them, right?

Do Microgreens Regrow After Cutting?

Microgreens can regrow, but not all varieties will. When you harvest most microgreens, you’re generally cutting them off right above the soil line and that means you’re taking the leaves, and the leave are what is required for photosynthesis and plant growth.

When you cut all the leaves off of a plant, its chances of regrowth are slim to none.

You might have missed some “late bloomer” seeds and those will grow, so there is a chance to get a few stragglers coming in, but for the most part it’s a lost cause.

Microgreens vs Sprouts vs Shoots

Understanding the difference between shoots, sprouts, and microgreens will help you see why regrowing microgreens can be a challenge.

Shoots are harvest once a stem forms but before the first set of leaves appears. They take around 7-14 days to get to a point of harvesting, and you’re not taking the seed with you when do you harvest.

Microgreens are harvested shortly after the first set of leaves appears. This takes around 14-21 days for you to be able to harvest them, and you’re not taking the seeds or roots with you when you do so there is a slight chance for regrowth.

Because sprouts are harvested including the seed, there is not change for regrowth since there is really nothing left.

With shoots and sprouts, while the seed remains, you’re still taking the part of the plant that contains the most nutrients and has a shot at photosynthesis.

What Affects Regrowth of Microgreens

So once you cut your own microgreens, what exactly happens?

Plants use their leaves to access the sunlight and sunlight is required for photosynthesis. When microgreens are harvested, you generally cut them right above the soil, which removes all of the leaves.

This means that most microgreens won’t be able to regrow. There are a few exceptions, such as peas since they grow a few sets of leaves and you can generally cut above at least one set of leaves when you harvest them.

Which Microgreens Can Regrow

While most types of microgreens aren’t able to regrow, there are a few that do have a chance at a second life.

Peas and wheatgrass are two types that can be regrown. Peas are able to get a second shot at life because they have multiple sets of leaves by the time you harvest the first harvest.

This allows you to cut right above the lowest set of leaves, and they’ll still have leaves to allow for photosynthesis.

Since wheatgrass is more of a grass than anything, it will continue to grow for a little while. Sequential harvests might not have the super green wheatgrass you get with the first one, but it will grow back.

Most other varieties of microgreens just won’t be able to regrow. This includes:

You’re taking all of the plant’s photosynthesis potential when you cut these varieties, so it’s just very unlikely to get a good harvest after that.

Pros and Cons of Regrowing Microgreens

Now that we know that some plants can be regrown, and even though you get a lower yield, some might want to move forward anyway. So let’s take a look at some of the pros and cons to regrowing microgreens.

Even though they will grow back, they’ll only give you about half of the initial yield you would expect from microgreens. Once you cut off most of the leaves, while they will start growing back it will take quite a bit longer than normal as well.

Is it Worth It to Try and Regrow Microgreens?

In my opinion, its not worth it. Seeds for growing new microgreens are generally pretty cheap, and since a second yield would take more time to grow AND they don’t produce as large a harvest.

If you grow microgreens for profit, then I would highly recommend against trying this out. With limited space and the need for high yields in a consistent amount of time, you’re going to want to just grow more microgreen seeds.

Is it worth it to use up a whole tray trying to regrow microgreens when you’ll get half the yield at a slower rate? Crunch some numbers, but I doubt it’s worth the opportunity cost of just planting new microgreens.

Can you Reuse the Soil After Harvesting Microgreens?

So while some microgreens regrow, it’s not a great idea – but can you use the same soil again?

It’s not recommended to reuse the soil. The soil can contain pathogens, microbes and bacteria. Especially if you’re planning on growing different varieties, those previous pathogens can stunt the growth of your next microgreen tray. While you can sterilize the soil and reuse the soil, I wouldn’t reuse it straight from a previous tray.

Since there are roots in the soil, the best option is to add it to your compost pile. Those roots will be great food for the worms and microorganisms in your compost, giving you an even better soil to use next time. 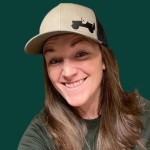 Hi - I'm Chenell! I'm on a mission to learn how to grow my own food, and help other people do the same.

I lived in the city for almost a decade, but after moving to the suburbs, I started making my Iowa blood proud and growing all kinds of food 🌽 I started this website to help keep track of the journey while teaching others the mistakes and things I'm learning along the way. You can follow along with the journey and learn more here.

Sure, it's a millennial thing to do. But here I am! :) Let's learn how to grow our own food together!