Getting a head start on your garden planning is a great idea, especially with a possible seed shortage due to the explosion of the gardening industry this year.

Starting seeds indoors is a great way to do this because you can extend your growing season (especially if you’re in a cold weather climate), growing different varieties than you can find at a local nursery or garden center, and grow plants from seed instead of buying seedlings at the store.

If you’re starting seeds indoors this year to get a jump start on your garden season, you’re going to want to use the best seed starting mix available to make sure your garden plants grow healthy and quickly.

I’ve never started seeds inside before, so I’ve done quite a bit of research and put together this guide to teach myself and help others in the same situation.

What is Seed Starting Mix?

Seed starting mix is a mixture of materials that is created to offer seeds the best change at life, i.e. germination.

Seed starting soil is generally lighter, more fluffy, and has finer particles than other garden soil.

Seed Starting Mix vs Potting Soil Mix- What is the difference?

Okay so we know they’re used for different stages in a plants life, but what makes them so different?

One of the main differences is that seed starting mix has quite a few less nutrients. Yes, you read that right. Potting soil is rich in nutrients, while seed starting mix is focuses on water retention, and being light enough for root growth.

In the early stages of life, seeds get most of the necessary nutrients from the seed itself. They don’t actually need all the fertilizers and nutrients in a typical potting soil mix.

I couldn’t believe that when I first learned it. How does something grow with the nutrients it has already? Baby animals need milk, baby people need milk – why wouldn’t baby plants need some kind of nutrients?

Nope, plants are just that badass.

And thus, potting soil is much more nutrient rich than a seed starting soil would be.

Potting soil tends to be more dense and coarse because it contains larger particles (like bark), while seed starting mix is more lightweight.

Because they are using different nutrition sources, seed starting mix has a much finer texture than potting soil. The finer particles allow for the delicate new roots to navigate around the soil.

The materials used in a seed starting mix, such as peat moss, are often much more lightweight and help keep from weighing down the seeds.

What is the Best Seed Starting Mix?

So now that you know all of those things about seed starting mixes, how do you differentiate between the good and high quality seed starter mixes?

Some of the best I’ve found are listed here: 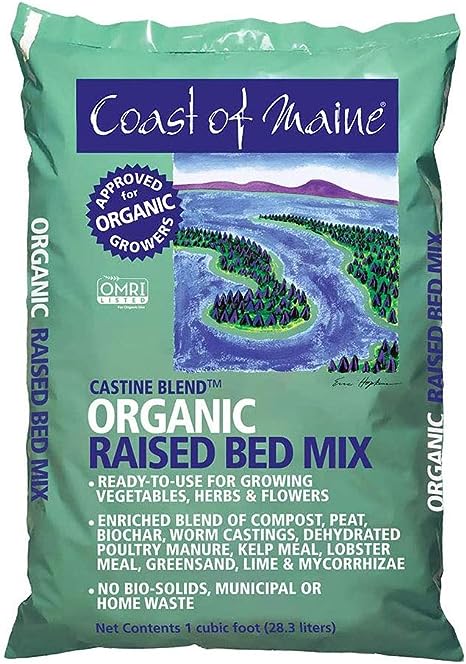 Coast of Maine - Organic Seed Starter - Sprout Island Blend
$21.69
Check Availability
We earn a commission if you click this link and make a purchase at no additional cost to you.

This seed starting mix gets great reviews from all over the place. It’s also enriched with worm castings which act as a compost like material. 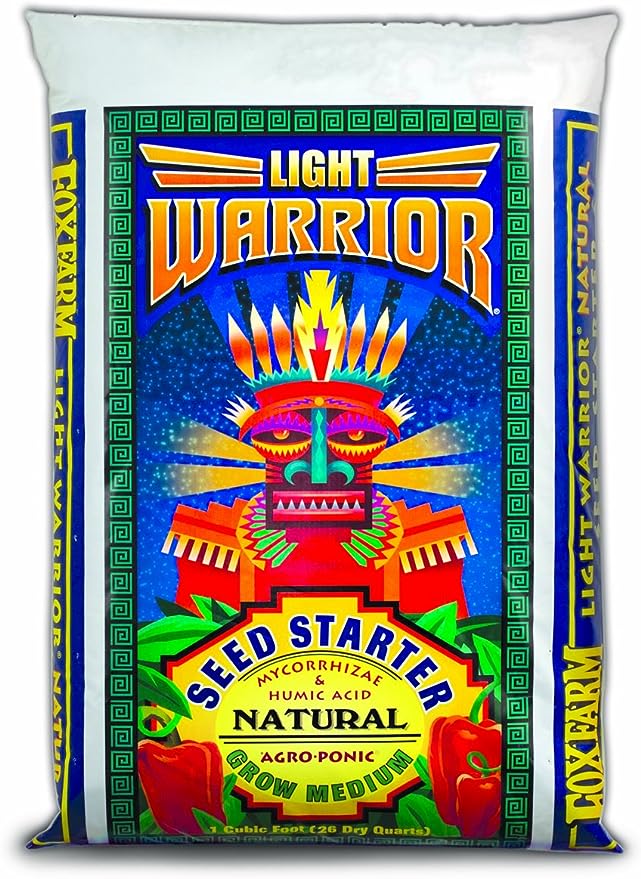 Hydrofarm Fox Farm Soilless Mix Check Availability
We earn a commission if you click this link and make a purchase at no additional cost to you.

Foxfarm gets rave reviews from all over the internet. Not to mention that hippy branding peaks my interest 🙂 I will have to put this one to the test! 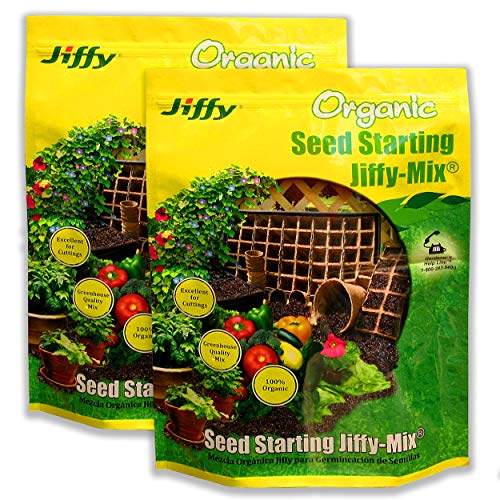 Jiffy Natural & Organic Seed Starting Jiffy Mix, 10 QT (2 Pack)
$29.99
Check Availability
We earn a commission if you click this link and make a purchase at no additional cost to you.

Not to be confused with the cornbread mix or peanut butter 😉

This is a classic option and has been around a long, long time. Some gardeners who have been around a while will swear by Jiffy Seed Starting Mix. 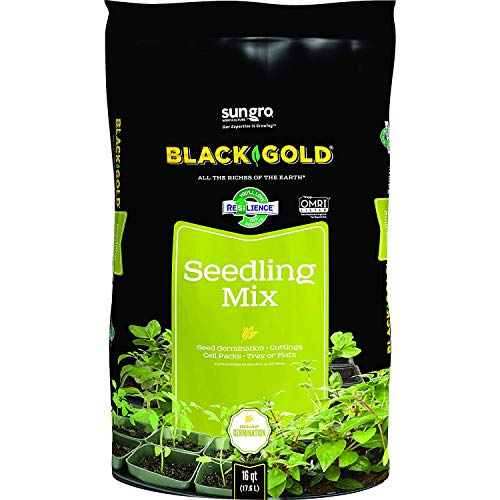 Black Gold 1311002 16-Quart Seedling Mix
$20.73
Check Availability
We earn a commission if you click this link and make a purchase at no additional cost to you.

A smart branding play here, as compost is generally referred to as “Black Gold.”

A lot of people swear by Espoma Organic mix – and from the comment section on Amazon you either love it or you hate it. As with most things I guess!

The ingredients in Espoma are sphagnum peat moss, perlite, limestone, and yucca extract. 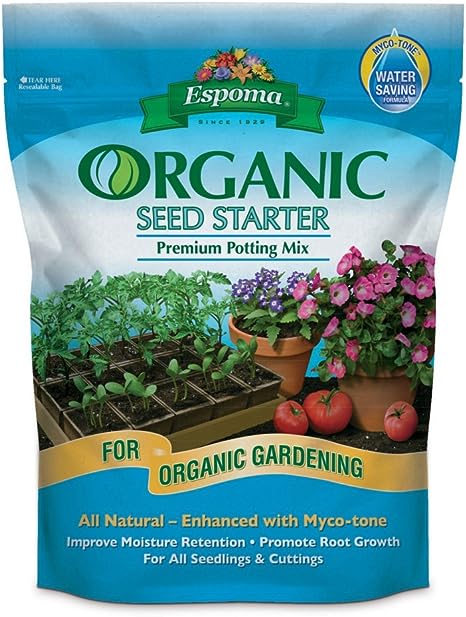 Espoma 16 Quart Organic Seed Starter Premium Potting Mix
$21.62
Check Availability
We earn a commission if you click this link and make a purchase at no additional cost to you. 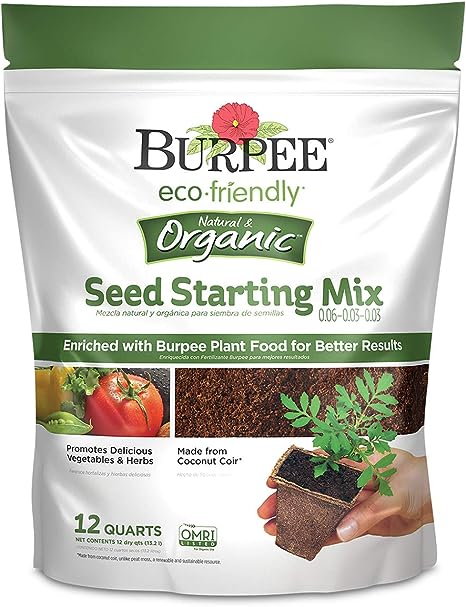 Burpee Organic Eco Friendly 12 Qt Seed Starting Mix 0.06-0.03-0.03 Check Availability
We earn a commission if you click this link and make a purchase at no additional cost to you.

Burpee is a huge brand sells seeds as well, so they have a lot of clout in the gardening space.

This one contains coir coconut fiber instead of peat moss.

This always confused me – how do you have a soil less soil? I just always thought everything grew in soil.

Soilless seed starting mixes contain things like coconut coir or peat moss, and are great options to make sure there are no pathogens (bacteria, virus, etc.) or contaminants.

They ultimately give you more control over what you’re exposing your seeds to.

This sounds really, um, sterile and hospital-y. But sterile just means it’s a clean version of that mix.

The manufacturers just heat the soil above a certain temperature for an extended period of time to get rid of harmful bacteria.

While at first glance it sounds like a bad thing, it’s actually good for your seeds, so you can make sure they aren’t exposed to anything strange.

Peat moss is a super absorbent material which is great for seed starting. It retains water much better than the average potting soil or potting mix.

If you ask Wikipedia:

“Perlite is an amorphous volcanic glass that has a relatively high water content, typically formed by the hydration of obsidian. It occurs naturally and has the unusual property of greatly expanding when heated sufficiently.”

In short, perlite is a material that helps aerate your seedling mix. Seeds need oxygen to really thrive and germinate properly. Perlite isn’t just found in soil mixes, you can actually buy perlite by itself in big bags.

Here is a picture of some seeds I started indoors that have perlite in the soil. I circled it so you can see what I’m talking about 🙂

Vermiculite does not look like perlite, but serves the same purpose – to help aerate your soil or soilless mix to promote seed growth. It is also a naturally occurring material that prevents soil compaction and also helps retain moisture.

This is the more sustainable alternative to peat moss, but it has the same impact. It offers great moisture retention capabilities that promotes root growth and helps seed germination.

What to Look for in a Seed Starting Mix

Because I’m always questioning of how food and other products are produced, I just like the idea of the upstream benefits to buying organic seed starting mix.

While most of the ingredients in a seed starting mix likely are as organic as they come, it just makes me feel better about it. There are a lot of premium potting and seed starting mixes that aren’t necessarily certified organic.

So, I’m going to say going with certified organic or conventional is just a personal choice the gardener needs to make. Both are generally available at almost any big box store or garden center.

These two ingredients helps retain water, which is critical for seeds to germinate properly.

While both will do the trick, the main difference is the sustainability factor.

Peat moss is mined from bogs and thus is non-renewable, while coconut coir comes from actual coconuts (whether mature or pre-ripe) and is considered more sustainable.

You could argue that since coconuts are grown in other countries, the shipping probably negates the “more sustainable” aspect of coco coir over peat moss, but it is what it is.

Both peat moss and coco coir retain many multiples of their own weight in water, making them great options for a seed starting mix where water retention is important.

The ingredients in seed starting mixes are all over the place in terms of pH levels. Because seedlings do well with an acidic pH level of around 6.5, manufacturers might add lime into the mix as it balances this number out to that level.

Don’t be alarmed if you see that on the ingredients list. It helps to promote a healthy pH balance in your soil.

A seemingly less common ingredient in these mixes is Yucca Extract. Naturally, it comes from the yucca plant and has anti-microbial, anti-fungal, and anti-bacterial properties…which is to say, it generally seems quite helpful in the growth of young seeds.

Can you use potting soil to start seeds?

But in long, it’s a smart idea.

I grew some plants recently in potting mix, which seems to do the job, but WOW is it taking forever for them to grow. I have a feeling I’m going to have to sacrifice them for some new seedlings.

Using potting mix can incorporate all kinds of unnecessary things your seeds shouldn’t be exposed to, like extra nutrients, possible pathogens and fungus.

Of course you can. Is it easy? Yes and no. Getting the ingredients is simple, but making a good mixture of them will likely take some experimentation.

You just need to separately buy the common ingredients that are used in seed starting mixes. You can also check out the Mel’s mix mixture that many people swear by for container gardening.

You can make your own blends, and as you get more experienced with gardening and what your garden needs, you will likely do this.

You can find a great DIY potting mix recipe on the internet as well, but the basics are just buying those things and mixing them together in a way that imitates what the seed starting mixes use.

The perlite and vermiculite are critical to keeping the soil light and fluffy, but if you can only find one or the other, just use 2 parts of that.

Keeping the soil light and fluffy when starting seeds will help the roots of young plants navigate and grow longer.

I've lived in a big city for the last 9 years, but recently bought 1.5 acres of land and am figuring out this gardening thing on the fly! :)

Join me on my journey to grow my own avocado toast.