If you’re like me and you generally have a black thumb, you probably know what fungus gnats are. They magically appear on indoor plants after you think you’ve been taking excellent care of them.

When in reality, you’ve probably been overwatering the plants, creating a beautiful haven for fungus gnat larvae to thrive. And while gnats are one of the plant pests that is generally harmless to people and plants, overwatering your plants will lead to root rot, and eventually suffocation of your poor little plants.

The fungus gnats are laughing at you, and you’re crying in the corner because you can’t keep your houseplants or ANY plant alive.

What Are Fungus Gnats?

Here’s a video of some gnats I had on my indoor lettuce/arugula plant:

How to Identify a Fungus Gnat

How do you know if you are facing adult gnats, fruit flies, or something else entirely?

Fungus gnats look like mini mosquitoes in my opinion. If they didn’t make such erratic movements, they would be harder to spot.

They have clear wings, are black and have really thin legs.

If you’re comparing them to a fruit fly, they are thinner and have longer legs. A fruit fly is more orange/red in color, while fungus gnats are pretty strictly black/gray.

You can see from this picture how small they are – my camera would barely focus on them but hopefully this helps you get a grasp of their size.

The video above should help you see how the fungus gnat moves around. They jump, run around the soil, and fly around pretty erratically.

Why Are Fungus Gnats Bad?

Gnats are more annoying than anything. They won’t harm people, and rarely harm plants – unless you let them get way out of hand.

They aren’t necessarily “bad”, but you’re going to get sick of them really quickly, trust me.

When Are You Most Likely to Find Fungus Gnats?

These gnats need a moist environment, are are often found indoors. Houseplants and indoor seed starting environments are common places to find these pests.

How to Get Rid of Fungus Gnats

Getting rid of these guys isn’t rocket science, but it can take a bit of time. These most simple answer to this question is to remove the reason they are there in the first place – an excess of water.

Fungus gnats love houseplants and seed starting environments, but these remedies might help you get rid of the larvae and/or adults.

Yellow sticky traps were the first thing I bought when I realized I had a fungus gnat infestation. I had never used them before, so I didn’t realize how effective they would be! I hung them right above the plant and caught a BUNCH of them, and some house flies as well!

The next day the number of those buggers flying around was dramatically lessened, and over the next few days it was almost hard to find any gnats on my plants.

10/10 would recommend getting some of these off of Amazon or at your local hardware store at the first sign of fungus gnats.

You can also get the ones that sit near the soil surface and are closer to the source, but my plant was too bushy to fit these. These would be great for houseplants though.

This option is something you probably have laying around your house for treating wounds. But it works wonders for treating soil infested with fungus gnat larvae and other pests as well.

Combine 1 part hydrogen peroxide with 4 parts of water. Soak the soil with this mixture and you should start to see the gnats die down.

While it doesn’t kill the adult gnats, hydrogen peroxide will get rid of fungus gnats larvae, which means your problem will start to get better after a few days.

Neem oil is a very versatile tool to have in your gardener’s toolbox. It kills adult fungus gnats, which is great since most of the other options listed focus on the fungus gnat larvae.

Neem oil helps get rid of all kinds of pests like beetles, mosquitoes, aphids, caterpillars, and…fungus gnats of course. 🙂 Did you ever have a venus flytrap when you were younger? You could watch it capture and destroy little insects, or you would put your pencil near it and watch it try to eat that.

Well, why not put one of these near your infested plant and let it get a good feast in?

This one is a more fun option, because you get to see science working in action.

This scientific word is the name of a specific bacteria that makes toxins that are toxic to some insects, including fungus gnats. It’s non-toxic to humans and mammals, so you don’t have to worry about these contaminating your food.

Generally this is a good option to help control larvae and the spread of new flies and gnats. Once the larvae start feeding on this bacteria, they will being to die off.

Nematodes are tiny, microscopic worms that look for larvae of various gnats and flies in the soil. Sounds gross, but they work on fungus gnats, whiteflies, thrips, and other flies.

B.T. is a great spray for getting rid of hornworms and other unwanted caterpillars and worms that can destroy your garden plants and vegetables. I had never heard of this stuff before doing research for this article, but apparently it works wonders.

You can use this on hydroponics as well.

Step 2: Pour the vinegar into a mason jar, or other jar

Step 3: Add a few drops of dish soap to the jar

If you don’t have any apple cider vinegar on hand, you can always just use soap and water. I’m not a huge fan of this one unless you have all natural, organic, pure, hemp soap (kidding about those last 3).

But really, you don’t want to be spraying Dawn or Palmolive on plants you’re going to be consuming – so keep that in mind.

If you have a potato you don’t need, put it to use on fungus gnats!

This isn’t going to get rid of fungus gnats by itself, but it will help capture some of those gnats in the early stages of their lifecycle.

Other Ways to Kill Fungus Gnats

It’s usually okay to let the soil around your plants get a little dry. Skip watering for a few days and the plant should be okay, but the flies will start getting really annoyed and eventually die off or go find a better establishment to do their business in.

Dispose of the Top Layer of Soil Outdoors

Fungus gnats lay their eggs on the top layer of soil since that is usually where the moisture is. So you could just get rid of that top part of soil.

Take the plant outside and dispose of the soil – I wouldn’t put it in the compost bin since it has active fungus gnat larvae in there, and compost is generally wet.

Add a new layer of soil on top of the pot or container, and don’t overwater it this time 🙂

Adding sand to the top of the soil is a great option as well. Since sand generally dries out quickly, this will no longer be a great place for fungus gnats to build a family.

You can use pumice stones to create the same effect. It makes it much harder for gnats to get into the soil to lay their eggs which will help deter them from doing so.

Will Fungus Gnats Go Away on Their Own?

In short, no. As long as the environment is ripe (gross) for them in terms of excess moisture and a place to lay eggs, they’re going to stick around.

If you dry out the soil, yes they will eventually go away on their own.

How to Prevent Fungus Gnats

So you know how to get rid of fungus gnats, but how do you keep them from showing up in the first place? Well, for starters….

In all seriousness, plants don’t need to be watered every single day. In fact, if you let them go a day or two without water, the plant roots will dig deeper to find moisture and the plant will become stronger and more resistant to other problems and pests.

This is one of the best ways to prevent fungus gnats.

Water Plants From the Bottom

If you’re starting seeds indoors, go ahead and water your plants from the bottom instead of watering them from the top like a novice 😉

You’ll need seed trays without holes in them. These Bootstrap Farmer ones are my favorite.

The most durable seed starting trays on the market. They are more expensive than others, but will last a lifetime. Fungus gnats lay their eggs on the top layer of soil, so if you water from below, that top soil will be dry but your plants will still be able to get the water it needs to thrive.

In theory, you shouldn’t ever have a problem with fungus gnats again if you bottom water your seed starts. This should prevent fungus gnat infestations for good.

For house plants, you can get what are called “sub-irrigated” planters.

What that means is the plants get their water from below, keeping that top layer of soil dry and fungus gnat free.

Because soil tends to carry moisture in it, keeping a bag of extra potting soil in place where fungus gnats can’t get to.

For those of you interested in knowing more about the pests you encounter, here you go!

Plants Commonly Affected: Indoor/nursery/greenhouse plants, some outdoor plants. Particularly susceptible are plants such as carnations, African violets, geraniums, and poinsettias, but they can strike any weakened plant in the right conditions.

The Full Life Cycle of a Fungus Gnat 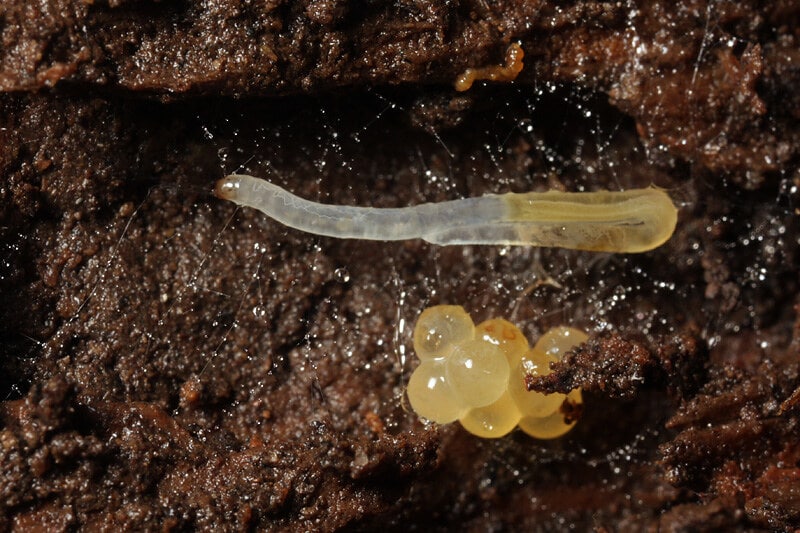 A fungus gnat larvae next to eggs. Source: Kim Fleming

The full lifecycle or breeding cycle of a fungus gnat is broken down into four stages:

Adult fungus gnats usually only live for about a week, but in that time they can lay hundreds of eggs. 🤢

So, you can see why a fungus gnat infestation can go from “it’s not that bad” to “HOLY CRAP!” in a very short amount of time.

Fungus gnat adults don’t mess around – or actually they do, a lot. #dadjoke