Growing microgreens can be an awesome hobby, or a great way to start a business doing something you love. But one of the main tools microgreen growers need, aside from seeds of course, are microgreen trays (also called germination trays). Microgreens grow on trays, that’s generally just how it works 🙂

You want to have one tray with drainage holes where you actually put your soil or seed starting mix, and place that inside of another tray that doesn’t have drainage holes.

There are quite a few different sizes for germination trays that you are likely to find. 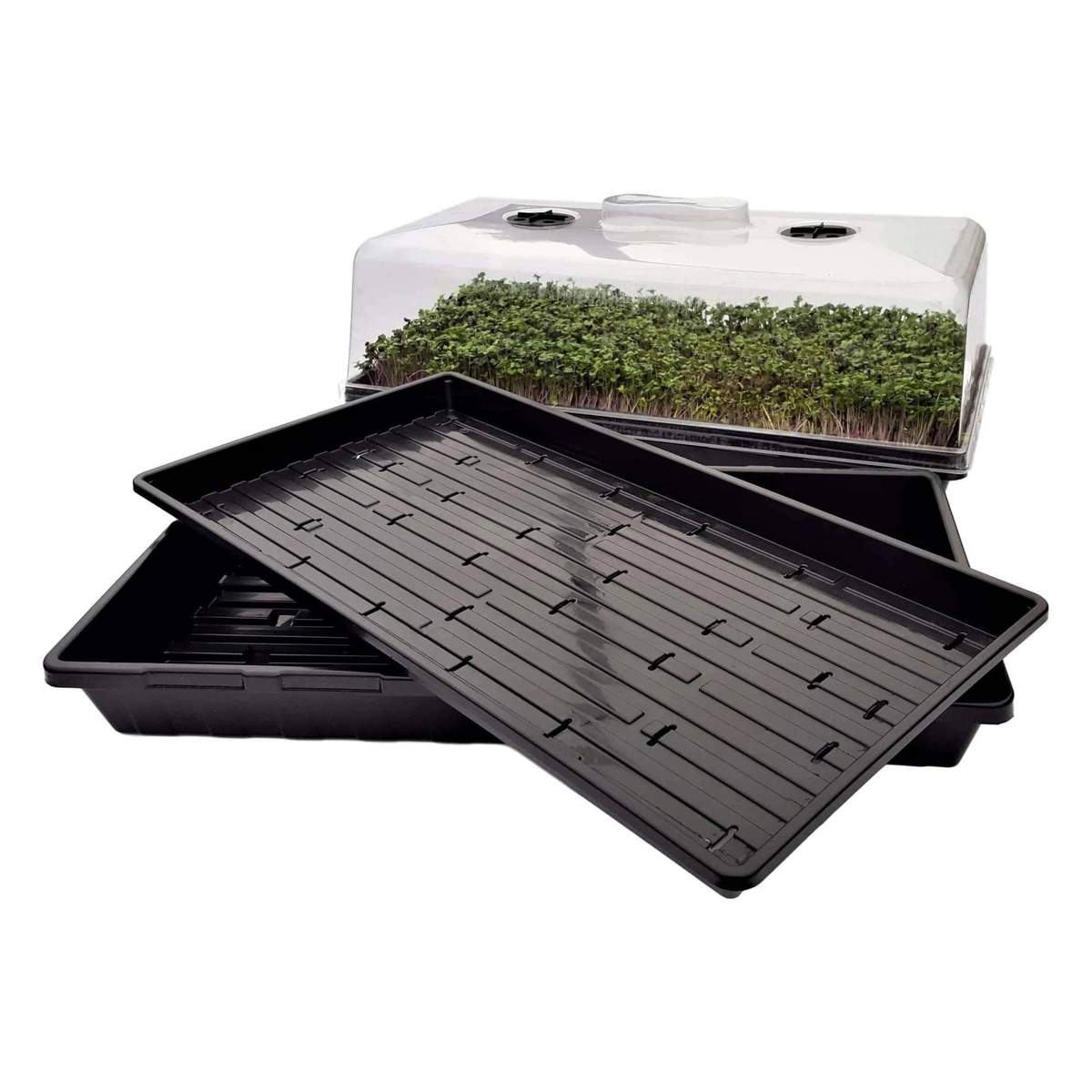 Also called “The OG” size (kidding). The standard size for microgreen growing trays is 10 x 20 inches, and are also called “1020 trays.” But keep in mind that not all 10×20 trays are created equal. That’s kind of frustrating right? Well, it is when you aren’t aware of it.

These sized trays fit well next to each other on a cart, which is why they are quite popular with microgreens growers. 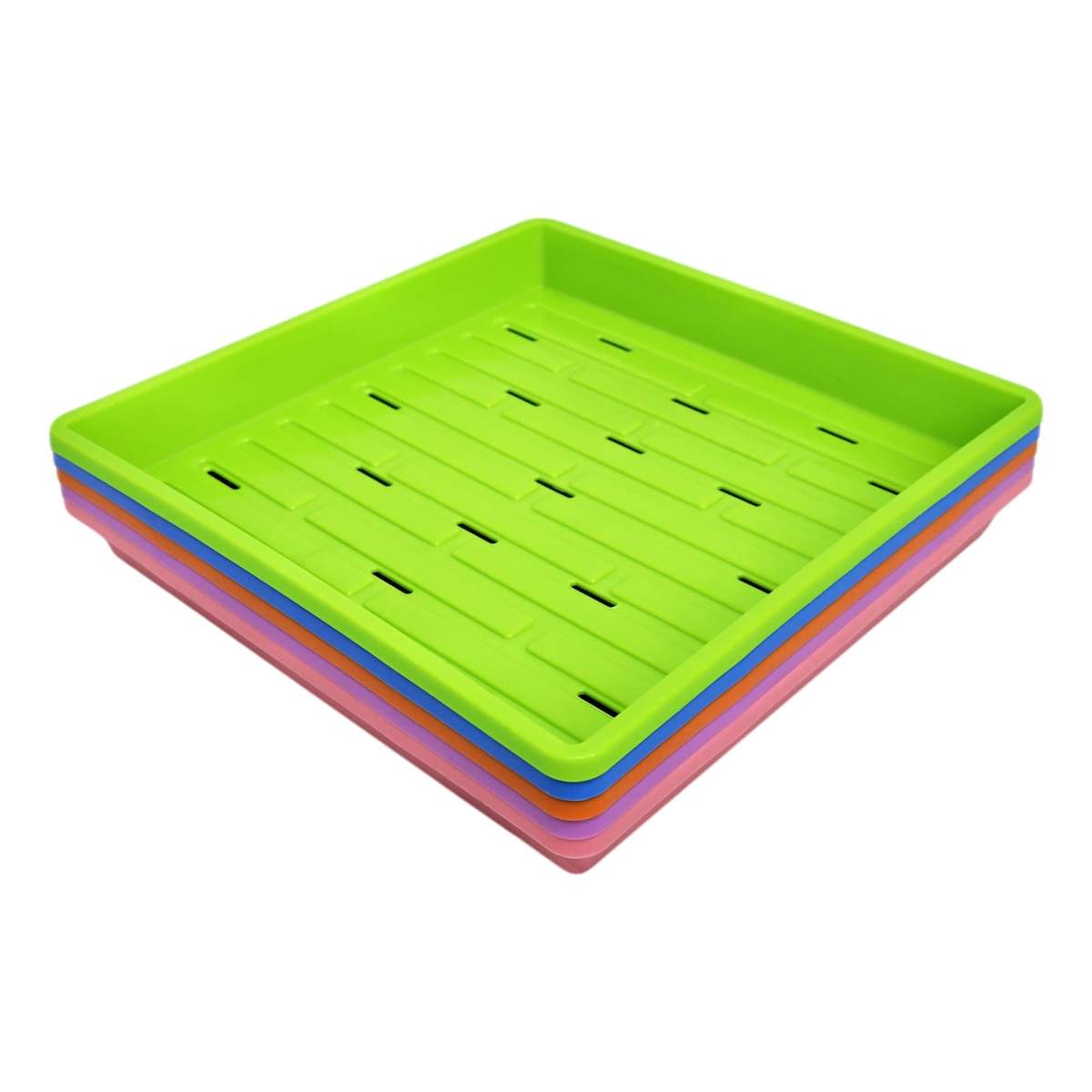 A more square shape that are good for smaller spaces or breaking up different types of seeds you’ll be growing. The same applies here as does the 10×20 trays – just because it says it’s a 10×10 inch tray, check the fine print and details as the sizes might be slightly off.

These will also fit well on a cart or shelving unit, as they are just half the length of the standard 1020 trays.

The Best Microgreens Trays You Can Buy

I love Bootstrap Farmer for buying microgreens trays because they make it super easy to understand what you’re buying. You can select with holes, or without holes, and they’re upfront about the depth and length of all their products.

Bootstrap Shallow Microgreen Trays
Pros:
Cons:
Check Availability
We earn a commission if you click this link and make a purchase at no additional cost to you.

Bootstrap Farmer trays are some of the most heavy duty trays I’ve used, so the extra cost is worth it to me. They’ll also replace your trays for free if they break or crack within the first year or two.

These are considered the best on the market in terms of durability and easy of use. But they are much more expensive and come in 11×22 inch flats instead of the standard 10×20.

These trays are BPA-Free and would be what I was referring to when I said they were “middle of the road” in terms of price.

They get good reviews and are sturdy, but they’re not going to be the same quality as the two companies above. 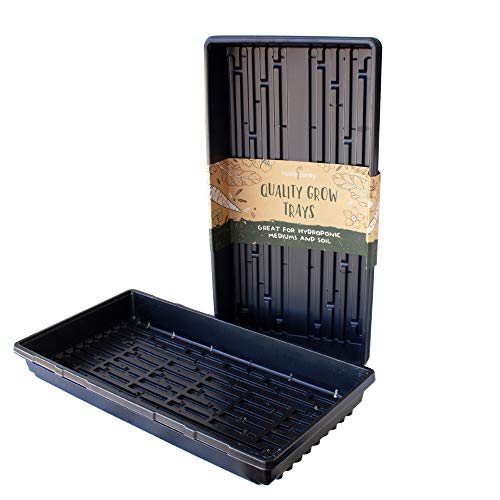 Handy Pantry 5-Pack 1020 Garden Growing Trays Check Availability
We earn a commission if you click this link and make a purchase at no additional cost to you.

True Leaf Market has some great options for buying trays. They’re not as sturdy as the Bootstrap Farmer ones, but they’re also not as expensive.

The trays I bought from them were some of the more flimsy trays I bought, but if you don’t mind buying new every 1-2 years, they’re great for the price.

Trueleaf 10x20 Trays Check Availability
We earn a commission if you click this link and make a purchase at no additional cost to you.

You can usually find gardeners or microgreens growers who ended up ordering too many trays or sadly have gone out of business and are selling their extra trays online.

No matter where you get your microgreen trays, always make sure you sanitize them before using them. If you had issues with fungus or bacteria in the past, or even if you didn’t or aren’t sure, it’s always a good idea to make sure your medium or containers are clean so you’re not spreading that environment around to future plants.

Let’s walk through some of the more important things to consider when buying a microgreen tray.

Plastic trays vary by depth, and while most will work together, this is a big consideration and not something to gloss over.

A shallow tray tends to work better if you want to grow microgreens, but if you’re starting seeds for a full garden, you’ll likely want to use deeper trays.

A lot of “standard” 10×20 trays are 2-3 inches deep, which can make it hard to harvest microgreens.

Bootstrap Farmer is one of the companies that makes shallow microgreen trays, both with and without drainage holes so you don’t need to fill up the trays with tons of growing medium. This can generally increase yields when you go to harvest as well because you can get a little more of the root system in your product – plus they’re food grade.

If you’re starting seeds indoors for eventual transplantation into your garden, you’ll probably want to forego the shallow trays for something deeper that can hold more soil and roots at the plant base.

You’ve probably seen these two types already if you’ve done any searching for trays. Some have holes in the bottom and some don’t. It’s that simple, but it’s also something you can forget about quite easily if you’re not paying attention.

Depending on your microgreen setup, you’re probably going to need a combination of growing trays that have bottom holes and ones that don’t.

Planting Trays – a tray with holes in it for proper drainage

Watering Trays – the tray you put the planting tray into water your seeds from the bottom.

A lot of people will put their seeds and soil in a tray with the drainage holes so they can make sure the soil isn’t staying too damp, and then place that inside of a tray without holes to keep water from leaking all over the place.

This is also a good setup for bottom watering your microgreens. Many microgreen growers will probably tell you its best to water from the bottom to avoid mold and fungus issues with overwet microgreens. I would agree here as you’re also removing good airflow from the plant base when you’re letting them sit in unused water.

How Many Do You Need?

This is where planning comes in. It’s best to know how many of these trays you’re going to need before you go ahead and purchase them. Of course, you can always buy more, but there are a lot of places that offer bulk discounts for purchased 10 or more trays.

This is a big one to consider when buying your trays.

Are you going to be growing microgreens for years to come, or is this a one-time experiment you recently got excited about?

If you’re going to be doing this for a while or are growing microgreens as a business, then you’re going to want to spend a little more to get better, more durable trays. The cheap ones might cost half the price, but only last one season, while the “more expensive” ones will last 5+ years.

It’s a no-brainer which one to go with as long as you plan to be growing microgreens for at least 2-3 years. Also, it’s just good for the environment to not be looking at everything as a one-time use item and instead using it again and again.

If this is a test, go ahead and jump on Amazon and just grab these cheaper trays that are in the middle of the road when it comes to price and get good reviews.

This is something I won’t budge on when it comes to growing any kinds of plants. The plastic needs to be BPA Free. This is why I won’t use red plastic cups if I didn’t see the packaging first. BPA is not something to mess around with and I’m not really interested in those chemicals leaching into my plant starts or microgreens.

Some companies like Bootstrap Farmer, sell colored microgreen trays which is great to help you keep track of which trays have which seed, which ones were started when, or which trays are using which soil if you’re running tests. The possibilities are endless! 🙂

I've lived in a big city for the last 9 years, but recently bought 1.5 acres of land and am figuring out this gardening thing on the fly! :)

Join me on my journey to grow my own avocado toast.